The “annus horribilis” for Christians in India 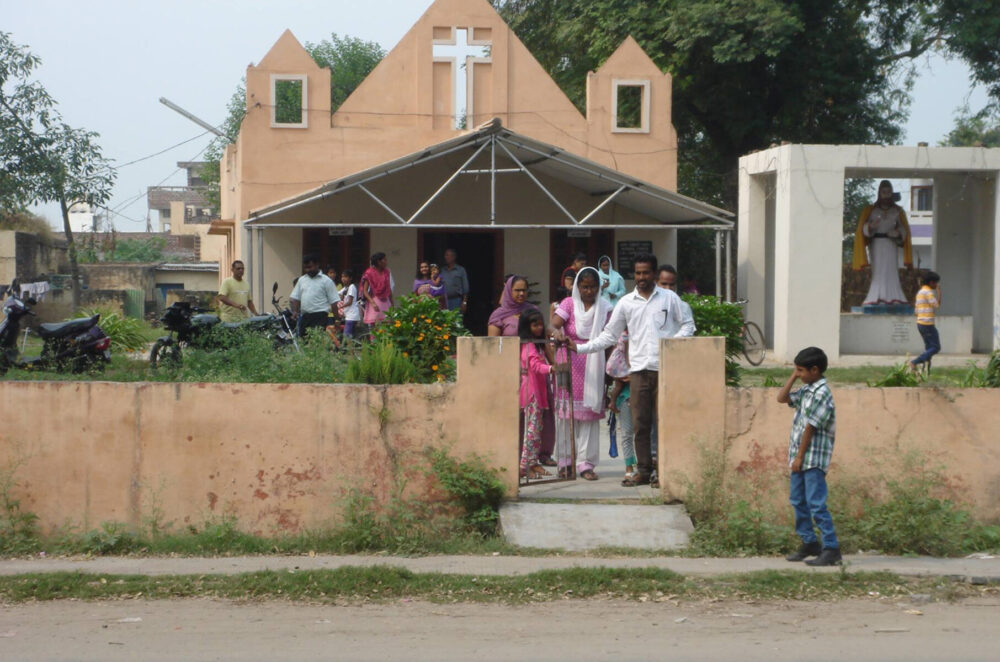 A group of the faithful outside a church in Rupnagar, North India.

Few people arouse as much “automatic” sympathy as the Missionaries of Charity (the nuns of Mother Teresa of Calcutta). The public admires them because they give their lives to the poorest of the poor, in places where good fortune doesn’t frequent. And as a result, for many, they’re practically a personification of good. But not among members of the Indian government.

The government of Prime Minister Narendra Modi wanted to close out 2021 by tightening measures for the religious charity: on December 27, the Information Bureau made public that the Missionaries had been denied the renewal of their license to secure foreign funds two days prior. According to the release, while the renewal request was being considered, the authorities had received negative information about the nuns – who, in a children’s home in the state of Gujarat, allegedly were carrying out forced religious conversion programs with Hindu girls to Christianity – prompting the government to refuse their foreign funding “OK”.

“The girls are being lured – says a police report – to adopt Christianity, by making them wear crosses around their necks, and by putting the Bible on the table in the living room to compel them to read it. It is a crime to force the religious conversion of the girls.”

Scrutinizing the work of these nuns is nothing new for the government of the Bharatiya Janata Party (BJP), which is pro-Hindu to the core. Despite the fact that ultimately the Ministry of the Home Affairs granted the religious charity back its license on January 7, Muslims and Christians are suffering increasingly violent physical and verbal attacks by Hindu radicals, who have learned that beatings, home destruction, and even killing goes unpunished when it comes to these creeds.

India, according to certain Hindutva leaders, must be “a Hindu Nation”. As in the video The Wire reported on, there have been recent very public calls for violence and the use of weapons, along with talk of exterminating the faithful of “foreign” religions. “If you want to eliminate their population, then kill them,” chairman, managing director and the editor-in-chief of Sudarshan News Suresh Chavhanke told a crowd in an address December 23. “Be ready to kill and to go to jail. If 100 of us are ready to kill two million [Muslims], we will have won, and to jail.”

The prevailing climate in the country, unfortunately, is conducive to these types of outbursts.

The pretext behind “forced conversions”

In such a large and populous country, the number of Christians is lost like a grain of corn in a hopper: they make up just 30 million out of nearly 1.4 billion inhabitants. They hardly represent any threat to the vast majority who profess Hinduism. They’re 2.3% of the population compared to 80%, but the fanatics have their accusations for every type of believer: if Muslims are unfailingly “terrorists”, Christians are guilty of “forcing conversions”, so any action against them is justified.

The discourse of Hindu extremists permeates many rural areas, where Christians are prevented from accessing basic services and denied all social relationships

There are countless recent stories, throughout the country. Last Christmas day, in a Catholic parish in Uttar Pradesh, a mob of fanatics stood outside the temple and began shouting “death to the missionaries” and “cease conversions.” “Every Sunday,” Father Anand, the parish priest, told The Guardian, “is a day of terror and trauma for Christians, especially those belonging to those small churches.”

But that’s not the worst of it. In late August, in the Chhattisgarh state, a crowd broke into a Protestant church during Sunday service, beating the pastor, his wife and his mother-in-law, causing them severe harm. And then there are the murders. One of the victims was a Pentecostal pastor, in June: an individual beat him to death and justified his actions by saying that the minister had had an affair. “His death was planned. In this village everyone is against us,” his widow said.

This exclusion of Christians seems to have permeated many rural areas, where Hindu extremists prevent them from drawing water from community wells or selling their products at markets, and where they are oftentimes forbidden from visiting the homes of neighbors, (who are also subject to heavy fines if they let them enter).

Decades ago, M.S. Golwakar, leader of the Rashtriya Swayamsevak Sangh (RSS), a Hindu organization that claims to work “for global peace,” but is more of a paramilitary supremacist group, signaled the way: “[Christians’] activities are not merely irreligious: They are anti-national. They will remain here as enemies, and as such we must deal with them.”

The order, without a doubt, is being carried out, fundamentally because the ideological inspiration behind those in power, the BJP, is rooted in RSS teachings. And it does not make things easy for Christians. “The BJP is very involved in this matter, in a big way,” Gaurav Tiwari, leader of the party’s youth in the state of Madhya Pradesh, told the New York Times.

Two journalists from the American newspaper recently documented, in an extensive piece, the vicissitudes that Christians have gone through in what is still often called “the greatest democracy in the world.” They listened to testimonies like that of lower caste woman Muttur Devi. A convert to Christianity as of two years ago, she does not leave home without placing a bindi – a small circular Hindu sticker, – on her forehead, to pretend that she still professes the majority religion: “If I take it off, the whole village will turn against me,” she assures. As well as stories of pastors who celebrate services clandestinely, who baptize catechumens in a similar fashion, and who only share audio versions of the Bible to the faithful for them to be able to hear the Word and avoid the danger of being caught with a print copy.

Stories that, in short, remind us that catacombs exist outside of Rome.

Any aid? Not from within our outside India

The Indian Constitution states that each person has the right to profess, practice and spread their religion (art. 25), and that no one, on the basis of their creed, may be discriminated against or, consequently, impeded “ access to shops, restaurants, hotels or places of entertainment “, as well as” the use of wells, tanks, bathing places, roads (…) dedicated to the use of the general public “(art. 15).

The reality, however, exposes a stark contrast. Regarding the first declaration, the fact of the matter is that of the 28 states (and 8 territories) that make up the country, 11 have instituted anti-conversion laws and one is considering doing so. The penalties are particularly harsh – in Chhattisgarh, for example, the sentence is three years in prison for anyone who “forces” another to adopt their faith – since conversion is deceptively linked to a hypothetical undermining of the State in favor of foreign powers. “The patriotism of the converts is under question,” warns a former minister of the BJP in that state.

As for illegal actions, some outright violent, against the faithful of other religions – particularly against Christians – there are several records which document them. One of the records, compiled by United Against Hate’s, the Association for the Protection of Civil Rights and the United Christian Forum, reveals that attacks against Christians have been reported in 21 states between January and September, in an irregular curve that is trending upwards; there were 37 attacks in January, but while the number dropped to 15 in May, in August there were 50, and 65 in September. In total, 305 attacks in nine months: 288 attacks by fanatical mobs, 28 churches damaged, and more than 1,300 Christian women injured.

Despite expert opinions, the U.S. did not included India in its list of “countries of particular concern” for its disregard for religious freedom

Who can they turn to for justice? Inside India, the answer is no one: the police either refuse to take a complaint, or end up putting the victim in jail. “The legal knowledge of the Christian community is very limited, and the police, in general, do not want to register their cases,” Sajan K. George, president of the Global Council of Indian Christians, told Aceprensa. “But even if officers do file a complaint, the attackers rarely face prosecution, and it is the complainant who runs the risk of punitive action being taken against him.”

“The forces of order and the other civil authorities empowered by the government are mere silent spectators of the violence against Christians, and the judges themselves do not respect the constitutional guarantees of these or other minorities”, adds George, assuring furthermore that it is possible to trace, in various court cases, the police’s collusion with Hindu radicals.

One would hope for pressures from powerful geopolitical players, but despite the blatant outrages, there is no queue of countries looking to condemn New Delhi’s failure to act. For example, in its 2021 report, the United States Commission on International Religious Freedom asked Democrat Joe Biden’s administration to put India on the red list of “countries of particular concern” because of the “severe violations of religious freedom” there.

To the bewilderment of 30 million non-Hindu citizens, the list published by the State Department on November 18 did not include the Asian country. “The United States and India have shared interests in promoting global security, stability, and economic prosperity through trade, investment, and connectivity,” the State Department’s website notes.

If the BJP, the RSS and the entire lot of openly anti-Christian groups already felt free to act as they saw fit towards the Christian community, the United States’ indifference is yet another pass to continue doing so.