How birth rates have evolved after pandemic-driven downturns 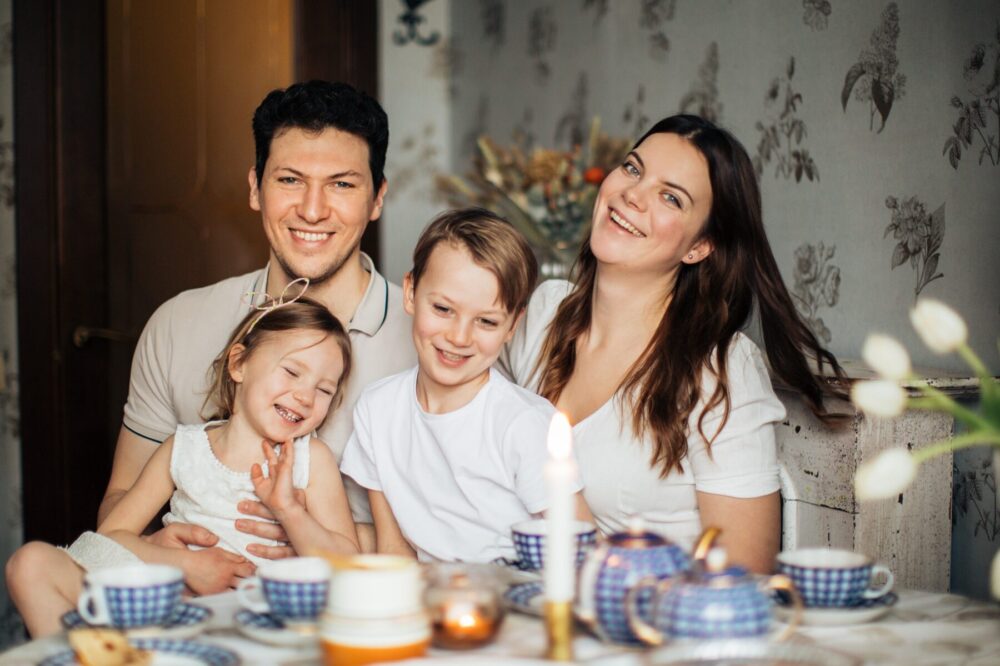 A year ago, the numbers showed that in 2020 the pandemic had caused a general drop in birth rates. It remained to be seen if births would return to normal or whether the downturn would leave a lasting mark. The provisional figures for 2021 show different situations depending on the country. For some, the 2020 numbers were a pothole on a downward trajectory; others have yet to come out of the slump; and then there are those countries which have emerged with more vigor or didn’t hit a pothole at all.

The table below shows different situations for several countries by year, with provisional data for 2021. 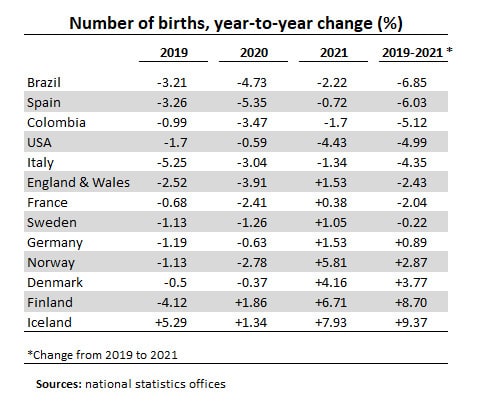 The graph below, which charts fewer countries for clarity, makes it easier to see if in 2021 the birth rate recovered or was below that observed in 2019. 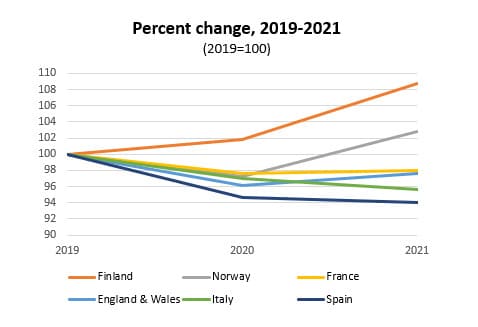 In most cases, countries’ birth rates were falling before the pandemic, fell sharply in 2020 and rose in 2021, but not enough to make it back to 2019’s numbers.

Those which haven’t made a come back

However, there are also countries that have not recovered from the fall. Among them are Brazil, one of the most affected by the pandemic, and Colombia. In any case, both previously had recorded higher birth rates than many other countries, which is still the case with more than 12 births per thousand inhabitants. They also still have a fertility rate higher than the average for developed countries (Colombia: 1.77 children per woman; Brazil: 1.56).

In contrast, Spain’s fertility rate, which was already among the lowest in the world, in 2020 fell from 1.24 to 1.19, close to the historic minimum of 1.13 in 1998. Thus, the dip in the birth rate was especially pronounced here, and the following year there was yet another fall, though it was very slight. The latest figure (338,000 births) is the lowest in the statistical series. Thus, the pandemic has so far resulted in a 5.5% decrease in the annual number of births compared to 2019. The negative natural growth of the population in 2020 was not compensated by immigration, meaning that the Spanish population shrinked, something which had already occurred from 2014 to 2016. New provisional data just released [*] show a 0.13% population increase in 2021, only because net immigration made up for natural decrease. Current population is estimated to be 47.43 million, just under pre-covid levels.

In the U.S., the numbers come out to –5%. However, there is a caveat. There the data corresponds to census years (July 1 to June 30 of the following year); therefore, the fall in 2021 corresponds to the two worst periods for the birth rate: the second half of 2020 and the first half of 2021. In short, the decrease, together with the excess mortality from covid-19 and the small net migration (+ 250,000, a quarter of what was normal until six years ago), has resulted in the smallest population increase recorded in the U.S.: 393,000 people (+0.1%).

2021 also marked a historic low for Italy. For the first time, there were fewer than 400,000 births. The country has lost 615,000 inhabitants in the last two years and remains at 58.9 million, the lowest it’s been since 2008. At the same time, in 2020 and 2021, deaths exceeded 700,000 per year, a low which hadn’t been recorded since World War II. The pandemic has wreaked more havoc there because Italy’s population is one of world’s oldest.

To boost the birth rate, Italy has improved family benefits by merging what was previously available in certain cases into a single, universal child allowance, which came into force last March. It consists of a direct deposit of 50 euros per month for each of the first two children, plus 65 euros for a third child and 165 euros for a fourth.

Back to the previous downturn

The following countries in the table are examples where an increase was seen in 2021, but which was not significant enough to cancel out the fall of the previous year. Germany is an uncertain case, because the provisional figures for 2021 show a curve that could both fall a little below or – more likely – above the 2019 total.

For the others, the 2021 uptick does not represent a trend change compared to pre-pandemic times: they’ve simply continued downward at the rate they were going, more or less. For example, in England and Wales (the other parts of the United Kingdom have separate official statistics), the fertility rate has been declining since 2013, as have the annual births since 2016. In 2020, England and Wales saw a historic low fertility rate: 1.58 children per woman; the estimated rate for 2021 is higher (1.61), but still lower than that of 2019 (1.65).

The Scandinavian countries (with the exception of Sweden) are the exceptions to the rule: they have come out of the rut stronger than before, and two of them –Finland and Iceland– never hit ruts in the first place. The birth rates have risen, drastically so; although it is worth noting that their strong percentage increases are explained in part because their absolute numbers are smaller in the first place, especially in Iceland, where the country’s 2021 almost 8% bump is equivalent to 358 more births.

But the fact that there has been an increase in the birth rate in the pandemic is still far from the general trend. Why? This may be due, among other specific circumstances, to these counties’ family policies where, thanks to them, lockdowns and teleworking have meant opportunities to have children, rather than stumbling blocks.

There are indications in favor of this possible explanation. In the U.S., where social protection is weaker than in Europe, the largest decline in fertility during the pandemic was among women between 30-34 years old, which is the demographic with children in school or younger. When schools closed, many had to leave their jobs to care for them at home and to help them with remote classes. It is reasonable to assume that the income loss and uncertainty about future employment would deter them from having more children. On the other hand, in the U.S. the birth rate rose among the younger demographic (20-24 years old), perhaps because they saw their careers would be on hold because of the health crisis and thus opted to take advantage of the impasse to experience motherhood.

In Europe, quite the opposite occurred. Where there was a drop in the birth rate –as the data from France, England and Wales, and Italy show–, the most pronounced was in women under 25, and the least pronounced, in those over 30. And the highest overall increase was among women in their thirties.

It seems clear that if there is substantial and well-paid parental leave, the opportunity cost of having a child is lower. And in the Nordic countries, these policies are amongst the most generous in the world. Parental leave is at least 11 months and includes almost 100% of the parent’s original salary.

A story by Elizabeth Anne Brown in National Geographic magazine suggests that this is the main explanation for the Scandinavian baby boom in the wake of the pandemic. In the midst of the covid-19 crisis, couples from these countries had fewer job opportunities at stake, and in contrast, guaranteed parental leave, where the financial benefits associated with it could be seen as a family’s potential safety net.

It’s a plausible hypothesis, but there are still no studies to corroborate it. Among other things, providing an explanation for the counterexamples of countries, such as Spain, with similar allowances, but which have not experienced an increase in birth rates is still necessary.

But perhaps the biggest 2021 news in demographics was that India recorded a fertility rate below the replacement level fertility threshold for the first time (2.1 children per woman). The pandemic may have been an influencer here, but the rate had already been falling long before. The drop will have no short-term effects. The current rate of 2.0, even if it continues to decline, will not lead to population decline (1.375 million today) or even negative natural growth for several decades, most likely. The generations of women of childbearing age are extremely numerous, so there will continue to be more births than deaths. But the population, which now has a median age of 28, will age.

With the addition of India, about two-thirds of the world’s population live in countries with fertility rates below 2.1. The other third is almost entirely in sub-Saharan Africa.

[*] Figures for Spanish population have been updated according to new provisional data released by the national statistics office on April 21, 2022.