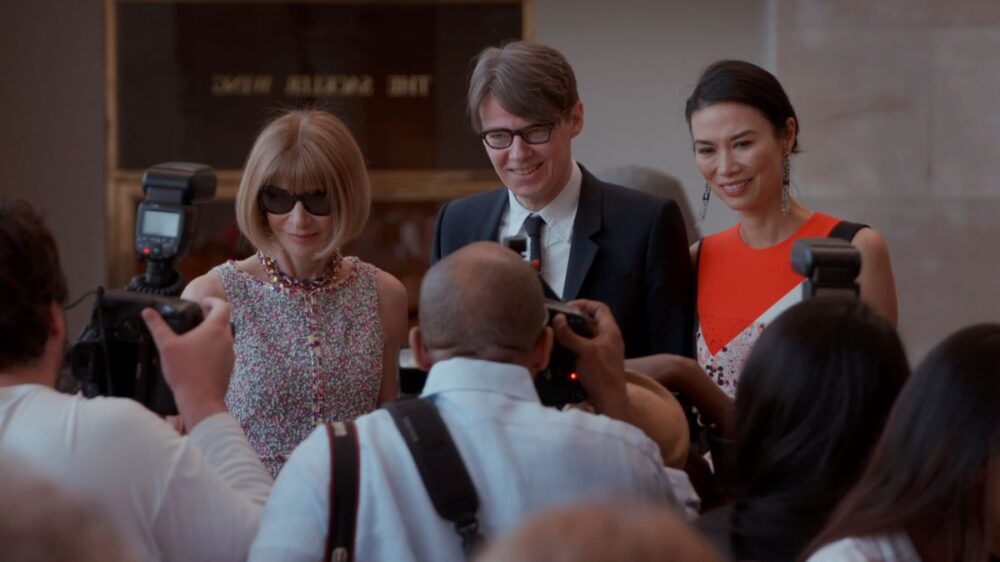 Anna Wintour, Andew Bolton and Wendi Deng Murdoch, organizers of the Gala (vignette from “The First Monday in May” / Magnolia Pictures)

You’ve probably seen the photos. Kim Kardashian in the dress worn by Marilyn Monroe to sing happy birthday to President Kennedy. Blake Lively paying homage to the oxidation of the Statue of Liberty with a spectacular two-in-one model and Rosalía dressed in Givenchy and sunglasses. Post-pandemic, the famous Met Gala returned to its extraordinary normality. And it showed, once again, that it is not just a showy red carpet but the most important event of the year for the fashion industry.

1. A “party” with a history and name behind it: Eleanor Lambert

The first edition of the Met Gala was held in 1948. Two years earlier, the New York Dress Institute had been integrated into the prestigious Metropolitan Museum of Art (Met). From the very beginning, the American fashion industry itself was meant to be in charge of raising the necessary funds to maintain the Institute and from this idea, a key figure emerged: that of Eleanor Lambert, a publicist with a magnificent way of coming up with whimsical ideas, and a woman convinced that fashion is an art.

Lambert “invented” New York Fashion Week in 1942 — an idea that almost all the fashion capitals of the world copied thereafter — making a list of all the best-dressed women in New York. And it was her idea to throw a party in 1948 to raise funds for the Dress Institute. In addition, to balance out Europe’s heavy weight in the fashion world, she launched the Council of American Designers, the group that’s in charge of organizing the Met Gala.

From the beginning, moreover, the Gala has been associated with an annual exhibition that’s the institute’s flagship activity. But we’ll get to that later.

2. From exclusive party to social event: The role of Diana Vandrell

In 1972, Diana Vreeland, after a long and stormy career as fashion editor at Harper’s Bazaar and Vogue, was appointed as director of the Dress Institute and she set out to turn the Met Gala into a cultural event. Vreeland’s many contacts filled the Galas with Hollywood stars. In 1974, she arranged for Jackie Kennedy to host the event, which was dedicated to the “glory of Russian costume” that year. The media success was unprecedented. Diana Vreeland died in 1989, leaving the Met Gala with a reputation like none other.

It wasn’t easy replacing Vreeland’s talent or maintaining her standards. The Met Galas lost strength and the resources of the Institute dwindled: so much so that in 1991 there was hardly any annual activity or exhibition at all. And that’s when Anna Wintour, the almighty editor of Vogue America, came onto the scene, spearheading the Gala in 1995. Since then, Wintour has raised more than 200 million dollars. The formula for success? A list (in true Eleanor Wilson fashion), a shroud of mystery and working in tandem with Andrew Bolton. In addition to Wintour’s charisma, of course. But we know more about that from movies like “The Devil Wears Prada” and the documentary “The September Issue.”

Part of the success of the Met Gala is its legendary guest list. To be invited to the party you not only have to be rich and famous – seats run around $30,000; Anna Wintour, who personally reviews the list, also has to give the “OK.” This turns the guest selection into a real competition.

People attend the Gala to shock: to be talked about, even if it’s negatively. To make covers and be the next trending topic

5. A shroud of mystery

Yes, the red carpet is openly broadcast via streaming on various channels – Vogue’s website, the Metropolitan Museum of Art’s website – and every social networks posts the looks of attendees ad infinitum. But once inside, nobody knows exactly what happens at the Gala. There’s talk of musical performances, film previews and private visits to the exhibition that inaugurates the Gala, but photos are prohibited. This veil of secrecy and mystery adds points to a party that is already exclusive.

One of the intrigues of each edition is what the dress code will be. Each year the Gala adopts the theme of that year’s exhibition and encourages the guests –and their designers– to “play” with fashion around that theme. This is one of the reasons behind the spectacular nature of its red carpet, because, while there are those who opt for classic, people attend the Gala to shock: to be talked about, even if it’s negatively. To make covers and be the next trending topic. If you do, Anna Wintour is more likely to invite you back the following year (just look at Blake Lively).

Etiquette, freedom and originality: that was the key to Kanye West’s 2016 triumph with ripped jeans and a beaded jacket, the Jean Paul Gautier dress made from curtains that Linda Evangelista wore in 2004 (the theme that year was fashion and furniture in the 18th century), the yellow silk and dyed fox fur coat which weighed more than 25 kilos that Rihanna wore in the 2015 gala dedicated to China, and the Moschino lamp dress that Katy Perry wore in 2019. And that’s not mentioning the black, burqa-esk outfit that Kim Kardashian wore last year which no one ever quite figured out. Rumor has it, Anna Wintour’s didn’t want to include the Kardashians in her select group –this year all four sisters attended the Gala for the first time–; but, given how viral their outfits became, it’s only fair to recognize that they’ve become the queens of this grand costume party.

“For me, the only risk is to continue presenting fashion as something frivolous… Fashion is a living art form” (Andrew Bolton)

This year, the theme of the Gala was Gilded Glamour, in reference to the Gilded Age, or golden age of the United States. An era around 1870 in which the U.S. experienced strong economic growth and where the fashion industry also grew exponentially. If you want to see how people dressed at the time, just take a look at “The Gilded Age,” the fashion show – literally and figuratively speaking – from HBO.

In any case, the guests were given two clues: gold and white glamour. From there, it was left up to their imaginations.

7. Andrew Bolton, the genius behind the exhibitions

A little carrot. A little stick. Someone from reality tv and someone from the upper echelon. Because the Gala wouldn’t be what it is without its cultural impact and the ability to reach intellectuals. And here we have to talk about Andrew Bolton.

In 2002, a British anthropologist and curator from the Victoria and Albert Museum in London began working at the New York Dress Institute. His mission? The annual fashion exhibitions. Bolton is a man convinced that fashion is an art and that it must have a place in museums. He’s also convinced that the layer of frivolity surrounding it is just that, a layer, and that beneath it lies fashion’s important power to transmit ideas. “For me, the only risk is to continue presenting fashion as something frivolous. There’s a frivolity. It’s part of its power. But by no means is it everything… Fashion is a living art form, easy to identify with and relate to. There is an immediacy that distinguishes it from other forms of art. It responds, faster than other disciplines, to our social and political climate”.

His profile as an anthropologist determines, in a decisive way, his thematic proposals: “Part of my effort consists of knowing what designers consider relevant, in order to contextualize it from a more complex and anthropological perspective”.

Years later, and as the chief curator of the Institute, he would once again triumph with several more of his exhibitions: “China: Through the Looking Glass” (2015), which drew 816,000 visitors, or “Manus x Machina: Fashion in an Age of Technology” (2016), with 753,000 visitors. The record though was his work which examined the relationship between Catholic imagery and fashion: In 2018, 1.65 million people visited the exhibition “Heavenly Bodies: Fashion and the Catholic Imagination.”

And speaking precisely of this exhibition, we can’t forget to highlight the Met Gala’s powerful network of allies. The media repercussions of the Gala and the reputation of the annual exhibitions weave an important network of friends. Sometimes unexpected ones.

In the 2018 exhibition, Andrew Bolton had 40 pieces donated from the Vatican. Bolton’s initial idea was to talk about the relationship between fashion and religion, but through his many visits to Rome and countless conversations – the negotiation, logically, wasn’t easy, as Jason Horowitz describes in a New York Times feature story – he was convinced that there was more than enough material to focus solely on the Catholic Church.

This year, for the exhibition “In America: An Anthology of Fashion” which traces a journey through the history of fashion in the United States, Bolton has had the support of nine celebrated film directors who were been asked to convert several Institute rooms into cinematic vignettes with costumes based on American designers, preferably non well-known names.

9. Not without my cause

Like any fashion event, especially one with so much hype, the Met Gala is a magnificent arena to raise ideological flags or defend political causes. Fashion and politics can kiss. And, if last year, the slogan stamped on Alexandria Ocasio-Cortez’s dress –“Tax the rich”– caused rivers of ink to be spilled, this year there’s been talk of a circular economy because of the Marilyn dress re-worn by Kim Kardashian or Emma Stone’s decision to recycle one of the dresses she wore at her wedding. There’s also been a lot of talk about Riz Ahmed’s simple outfit, who, dressed in stark navy blue and work boots, wanted to pay tribute to the immigrant workers who made the construction of the United States’ golden age possible.

In short, Ahmed echoed numerous criticisms of the Gala and its insensitive celebration of America’s most opulent era precisely in the midst of an economic crisis, with inflation rates that have impoverished thousands of families.

In any case, Bolton had already come out saying that his exhibition of America’s industry wanted to focus on less-known designers. “We’re going to focus on good designers who were not known names, who have been eliminated from fashion history, ignored or simply forgotten”, Bolton said at a press conference in the presentation of the exhibition, in which he added that “the majority are women”. Indeed, there’s a strong female and African-American representation.

Lastly, the Gala has another very important ritual component. It’s always celebrated on the first Monday of May. It was precisely on this legendary date that the party made its comeback this year after the 2020 edition was suspendered because of COVID and the 2021 edition largely limited in attendance.

Andrew Rossi, the celebrated documentary filmmaker, used precisely this date to title the documentary that best reflects the behind-the-scenes of the Met Gala. The report focuses on the preparations for the 2015 Gala dedicated to China and collects the opinions of its protagonists, as well as designers, actors and decorators.

After its 90-minute run, you’re left with little doubt as to why the Gala is the fashion event of the year. The 16 million dollars that were raised in 2021 (an edition with limited capacity) are explained and its impact in the media, understood. The Met Gala is, unquestionably, in a league of its own.