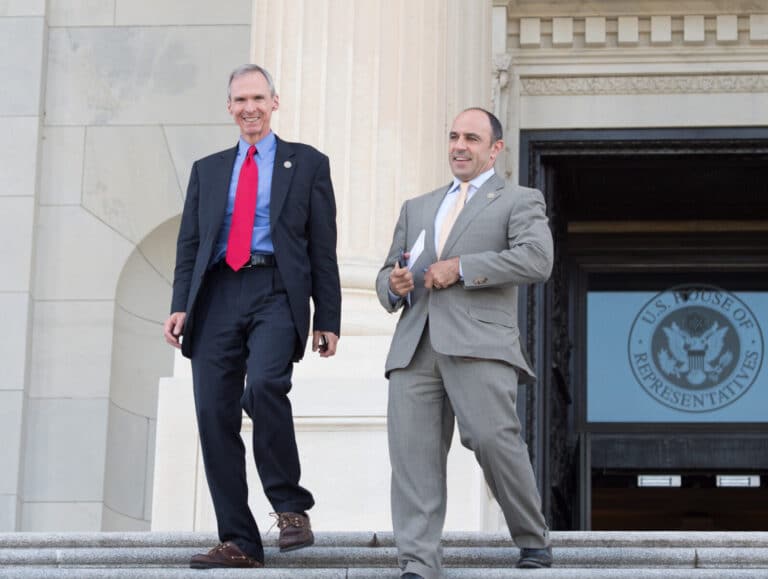 Dan Lipinski, left, before the U.S. Capitol in Washington, D.C.

Militantly active in favor of the pro-life movement and, in addition, a Catholic in-line with the teachings of the Church, are not the most sought-after credentials among Washington politicians in the Democratic Party. Dan Lipinski was both – is both– and he was able to carry out his work as a Representative for Illinois from 2005 until last January.

But the party’s ideological hierarchy, which once allowed for its members to make careers out of opposing abortion (like the classic example of Joe Biden in his early years as senator) has ended up chiseling the “right to abortion” in stone, and anyone who wants to occupy a seat in the Capitol or keep the one they already have, must give in to this dogma.

That wasn’t on the table for Lipinski though. And that’s why the party’s elite and the pro-abortion PAC EMILY’s List decided to get rid of him, injecting millions of dollars into his party rival Marie Newman’s 2018 and 2020 primary campaigns. They couldn’t shake him the first time around, but they managed to in 2020, when five Democratic presidential candidates backed his opponent.

Lipinski decided to retire from political life thereafter, focusing on university teaching, although he still follows events in Washington, where –he maintains– a believer truly consistent with their faith doesn’t quite fit one hundred percent into either of the two major political parties. It’s precisely on these issues, that he agreed to answer several questions by Aceprensa.

— How was it possible for a well-trained Catholic to spend 8 terms in a party increasingly hostile to the pro-life cause?

— It is important to understand that America does not have a parliamentary system where representatives are elected specifically to vote for the party platform. When our Constitution was written, members of Congress were expected to represent their constituents and not a party. I was elected to Congress as a Democrat, but I told voters that I was pro-life and I would vote that way.

When I was first elected, Democratic politicians could still be pro-life and be elected in a party primary election in my district. From the start, I regularly had Democratic challengers who made my pro-life stance their number one issue against me. I knew that being pro-life also meant that I would not rise to higher office or become a leader in the party. While I knew that other Democratic politicians didn’t like my pro-life position, they didn’t express it to me directly. However, I did encounter a lot of verbal abuse –sometimes profane not just anonymously online but directly to my face.

“I had learned much from St. Thomas More who practiced prayer, the sacraments, and lifelong learning to form his conscience”

— What were your most difficult moments?

— In 2009-2010, I went through a difficult time when I opposed the top priority of the Democratic Party and newly elected President Barack Obama, the Affordable Care Act. I worked with other pro-life Democrats in the House to try to prevent the bill from including funding for abortion or health insurance that covers abortion. While we initially won a legislative victory, we wound up losing in the end. Most pro-life Democrats wound up voting for the bill, but I did not. That, along with losses by many pro-life Democrats in the House in the 2010 and 2012 election, put me in a position to become the Democratic pro-life leader in Congress. I never intended to play that role, but I knew that I had to accept that mantle when the time came.

In early 2017 there was a decision made by the abortion lobby to try to defeat me in the 2018 Democratic primary. They spent over $3 million dollars to defeat me, constantly attacking me in television ads and mail pieces as being “anti-woman” because I was pro-life. The news media, locally and nationally, was largely against me, presumably because I was pro-life. My opponent was a woman who said she is Catholic but supported the most radical pro-abortion positions. It was a very hard-fought election, but I narrowly won 51%-49%.

After that election, my opponent never stopped campaigning. In essence, the Democratic primary election of March 2020 was contested by my opponent and her supporters non-stop for three years. In the 2020 election campaign I was outspent by a two-to-one margin. Five Democratic presidential candidates endorsed my opponent because I was pro-life and they needed to show their support for the abortion lobby. National and local Democratic political leaders endorsed my opponent also. The party had become so radical on the abortion issue that Joe Biden who had opposed taxpayer funding for abortion since the start of his 45 year political career changed his position in order to stay competitive in the Democratic presidential primaries. It was a very difficult three years for me and my wife, Judy, with the constant attacks and the lack of support from other Democrats.

People often asked me how I stayed strong and stuck to my pro-life stance. I had learned much from St. Thomas More, who practiced prayer, the sacraments, and lifelong learning to form his conscience. He also exercised humility which enabled him to retain his moral integrity by following his conscience. In addition, the support of my wife and other strong Catholic friends helped to sustain me. I never considered changing my position and I continued to speak out about the need to protect babies in the womb. I have absolutely no regrets about that.

— Sixty Democratic Catholic politicians have opposed the U.S. Conference of Bishops’ decision to draft a document on the provisions necessary for access to Communion. Lack of religious conviction, political calculation…?
— I always try to refrain from speculating about the motives of others. Only God knows what is really in their hearts. For most – hopefully all – Catholic politicians, I believe that if they had to choose between heaven and political power, they would choose the former. But most people don’t like to make tradeoffs. We try to have it all. That leads us to look for loopholes so we can take the easy way out. I always saw clearly the conflict between the Democratic Party’s position on abortion and the Church’s doctrine on life. I knew that I had to make a choice. However, many people (including some in the Church) want to confuse Catholic politicians about abortion and Catholic doctrine. This is often easy to do because most Catholics have been poorly catechized. Some statements and comments by Catholic Democratic politicians have demonstrated this.

— Can it be said that, unfortunately, the position of these politicians fits with that of a good part of American Catholics?

— With your departure from the House of Representatives, has the pro-life cause been orphaned in the Democratic Party in Washington?

— There are a very small number of Democrats in Congress who vote pro-life on many, but not all, issues related to abortion.

— Can it be said that whoever is pro-life and wants to dedicate himself to politics only has options in the Republican Party now?

— It has gotten to a point where people who are pro-life who are looking to run for political office understand that it is extremely difficult to have success as a member of the Democratic Party because it is so tough to win a party primary and gain the party’s nomination. However, there are still pro-life people who are trying to run for office as Democrats and I always strongly encourage them. I am an adviser for Democrats for Life, which is trying to reclaim space in the Democratic Party for people who are pro-life because between one-quarter and one-third of Democratic voters say that they are pro-life. It is very important for the pro-life movement to not only be represented in one party. The abortion lobby understands this and that is why they spent at least $6 million over two election cycles to defeat me. If every pro-life voter and politician moves to the Republican Party it make it even easier for party to take pro-life voters for granted and to fail to prioritize the life issue.

— In Washington, partisan polarization has increased. What main dangers arise from it for the good health of American democracy?

— The partisan polarization is very concerning because the American system depends on compromise to work. The authors of our Constitution didn’t create a parliamentary system but a presidential system with two co-equal legislative chambers. The purpose was to give Americans multiple points of access to the lawmaking process so that they felt they could be heard. The system was also meant to encourage deliberation and compromise rather than quick lawmaking. With two parties that have been roughly even in elections for decades, we have rarely had one party in control of all of the national government. This has made compromise even more essential. The current extreme partisan polarization hinders lawmaking leaving many issues unaddressed or in the hands of the president or the court system. When one party does control both chambers of Congress and the presidency, that party tries to make major policy changes without any input from the other party producing cries of illegitimacy from some who feel shut out of the process. Taken together, this is not good for the health of our democracy.

I also have concerns that the polarization has been detrimental to the Catholic Church. Political polarization has reached a point where it could rightfully be called sectarianism. Neither party/sect fully embraces Catholic social teaching. This has caused internal strife amongst Catholics because of political differences. In addition, some Catholics now choose to more closely follow the tenets of their party than the tenets of the Church.

— If the good people leave, only the bad ones are left to do the job. Do you consider it possible to try to return to Washington at some point, to help shape policies that are truly beneficial to the people?

— Right now I am not planning to seek political office, but I never say never. At this point I want to use my experience to help teach and inspire others about the Catholic faith and the call to serve the common good. I am spending a lot of time writing and speaking about this. I have published a number of articles in First Things and Public Discourse over the past year and a half. I am writing a book which incorporates my experiences serving 16 years in Congress to talk about how Catholics are specially gifted to help heal the division in America. I think this also relates in many ways to the entire Western world. As a former Congress scholar, I have also written a chapter for a book on Congress and I’m writing articles about the need for reforms in the way Congress operates.

I always encourage people, especially young people, to get involved in politics and in government because we cannot cede the public square and our governmental institutions to others who do not share our Catholic convictions about how to serve the common good. But any Catholic who decides to do this must dedicate themselves to developing their conscience and seeking the support of committed Catholics and other people of faith to help them stand strong when challenges arise, which they surely will.