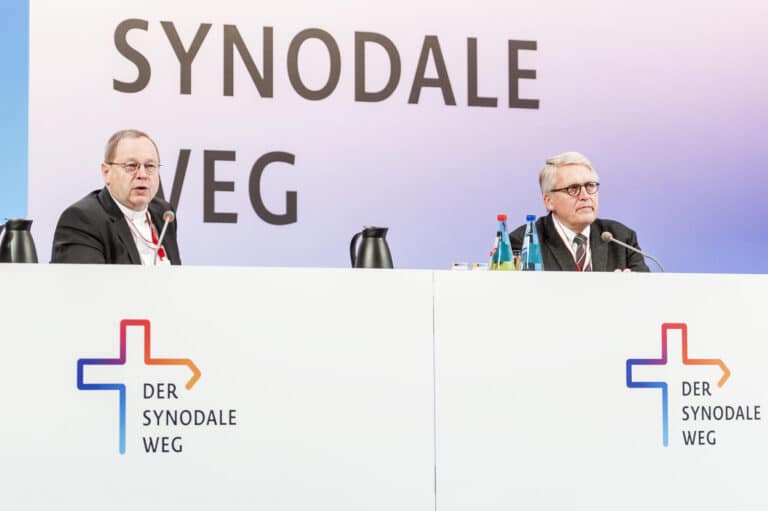 Berlin.— The second plenary assembly of the German Synodal Way (September 30 to October 2) has brought to light the serious discrepancies among its participants. Despite the majority of the group wanting to silence the criticism of some, the division is evident.

The assembly ended on Saturday afternoon earlier than expected: so many participants had already left for their homes for the weekend that the necessary two-thirds quorum to vote on the latest proposals was impossible. Archbishop Georg Bätzing, president of the Synodal Way and the German Episcopal Conference (DBK) was disappointed: “You can’t get things done like this.”

One of the proposals that was voted on and that was approved by a narrow majority (95 to 94) was “the question of whether the priesthood is needed at all.” However, in the press conference that followed, Bishop Bätzing was quick to clarify that “No one can say that the German Church is going to do away with the priesthood; there cannot be a Catholic Church without a priesthood.” Although he did add, “there are questions which should be raised concerning the role of priests, and not only because of the clerical abuse crisis.”

Although the final communiqué of the Assembly emphasized that the vast majority of the texts put to vote received an approval rating “between 76% and 92%” for presentation in upcoming forums, the truth is that there was not much “harmony” throughout the synodal hall. One example of this dissonance could be seen in the reactions to the recent papal decisions to reject the resignations of the bishops of Hamburg and Cologne – in like fashion to that of Cardinal Reinhard Marx of Munich’s being rejected as well- in a gesture of the Church taking responsibility in the face of the abuse crisis. Remarks were – according to the unofficial DBK webpage, “katholisch.de” – colored with “anger and annoyance,” and showed “the growing loss of trust in the Catholic Church.” Viola Kohlberger, a synod member appointed by the Central Committee of German Catholics, said that after the pope’s decision regarding Cardinal Rainer Maria Woelki, she was “unsure she wants to attend the synod assembly.” And the Bishop of Essen, Mgr. Franz-Josef Overbeck, proposed that in the forums to come “clear criteria be defined to decide which faults make the resignation of a bishop inevitable, distinguishing between systemic and personal culpability.” The objective is obvious: to leave the Pope without the option to decide which resignations he accepts.

On the other hand, some voices were raised criticizing the condemnation of minority opinions. Bishop Peter Kohlgraf (Mainz) said: “It does not seem right to me to say: ‘If you don’t agree with the synodal way’s texts, you remain guilty of abuses.’” The Archbishop of Berlin, Bishop Heiner Koch, also urged that all opinions be ensured a space in the debate.

According to Cardinal Walter Kasper, some of the Synodal Way’s proposals “clearly deviate from the teachings of Vatican II”

In a comment to Die Tagespost, Michael Karger, head of Science and Universities at the German Bishops’ Conference, said that “de facto, the Synodal Way aims to replace the constitution of the Church with a parliamentary system of assemblies; it is about accompanying the Church in the renewal of its episcopal sees and parishes, with a complete liberalization of the Church’s teachings”.

And he added: “Ultimately, those who ‘hold power’ are morally marginalized as accomplices in covering up abuses. Posts are not presented at all as responsibilities before God. Lastly, the introductions to the basic theological writings reveal a fatally anthropocentric theology, which isn’t grounded in first giving glory to God: ‘Because if man is for man alone, and not for God, then we can choose which people we sacrifice’ (Robert Spaemann). It is only through theocentrism that the evils of abuse come to light”.

On the other hand, in a conference in Augsburg on September 17, German cardinal Walter Kasper, president emeritus of the Pontifical Council for Promoting Christian Unity, criticized the official text on one of the key themes of the Synodal Way – the exercise of power and authority in the Church – because “so to speak, it reinvents the Church with the help of a scholarly theological and theoretical framework.” And he went on to say: “Some statements clearly deviate from the basic teachings of Vatican II, for example, in the sacramental understanding of the Church and the episcopate.” However, the motion presented to debate the matter was rejected by the leadership of the synodal forum, Claudia Lücking-Michel and Bishop Franz-Josef Overbeck, Bishop of Essen.

Cardinal Paul Josef Cordes, prefect emeritus of the Pontifical Council Cor Unum, added his own criticism to that of Cardinal Kasper, affirming that the Synodal Way “omits reference to the decisions of the supreme magisterium of the Church.” The Bishop of Regensburg, Rudolf Voderholzer, went further: he launched a website with alternative texts to those of the Synodal Way. Specifically, he referred to the fact that sexual abuse is being “instrumentalized” to adapt the Catholic Church to the Protestant Church. The president of the DBK, Bishop Bätzing, strongly condemned their criticisms: “To speak of an ‘instrumentalization of abuses’ by the Synodal Way is an inadmissible and presumptuous statement, and it is unfair to those affected.”

Democracy in the Church

For Josef Kreiml, their intention to establish a permanent “Synodal Council” is to control bishops

A well-founded criticism of one of the texts presented to the Plenary Assembly by the forums –in this case, Forum III: “Women in Church ministries and positions”– and which is entitled “Exchange of theological argumentation in world ecclesiastical contexts”, was offered by Josef Kreiml, professor of Dogmatic Theology and the person in charge of the bishopric of Regensburg for the Synodal Way. In this text he describes the “path of synodality” as a principle for the Church, making self-interested use of a quote from Pope Francis.

According to Kreiml, they want to “continue with the current German format of the ‘synodal way’, even though it has no foundation in canon law. The group aims to make the conversation between bishops and the baptized and confirmed during the decision-making process a permanent practice. They want the bishops to appoint a Synodal Council of the Catholic Church in Germany, which would be made up similarly to the Synodal Assembly, but smaller. With the creation of such council, the Episcopal Conference would be “closely united” and there would be “a close exchange with the dioceses.” I don’t understand why the creation of the ‘synodal way’ project should now be approved as something permanent, as its success remains to be seen (not to mention the nature of this success). In Germany there are already enough supradiocesan guilds; Why should another ‘Synodal Council’ be created now?

For Josef Kreiml, the only reason to create this new Council would be to serve as “the oversight body of the bishops.” At the beginnings of the Synodal Way it was clear that, according to canon law, each bishop would have the authority to decide which outcomes of the Synodal Way are put into practice in his diocese. “The new aim is that – continues Kreiml – the Synodal Council ensure that the dioceses periodically report on the implementation of the decisions reached by the Synodal Way.” His conclusion was that “the bishops would be supervised by this ‘Synodal Council’, restricting their episcopal rights.”

In any case, the alleged “harmony” amongst the Assembly is evidently affected by critical voices, even if many try to silence them. The controversy will continue throughout the upcoming forums.